Thanks! I'm looking forward to seeing it! I'm planning a simple bull bar with two more hella 1000's in the future myself.

Had to take advantage of a day off and did a little upgrade/repair to the Baja!

I got new bed plastics from someone with a parts car, the old ones were damaged from the PO using it as a work truck, so it was time for a fresh start. 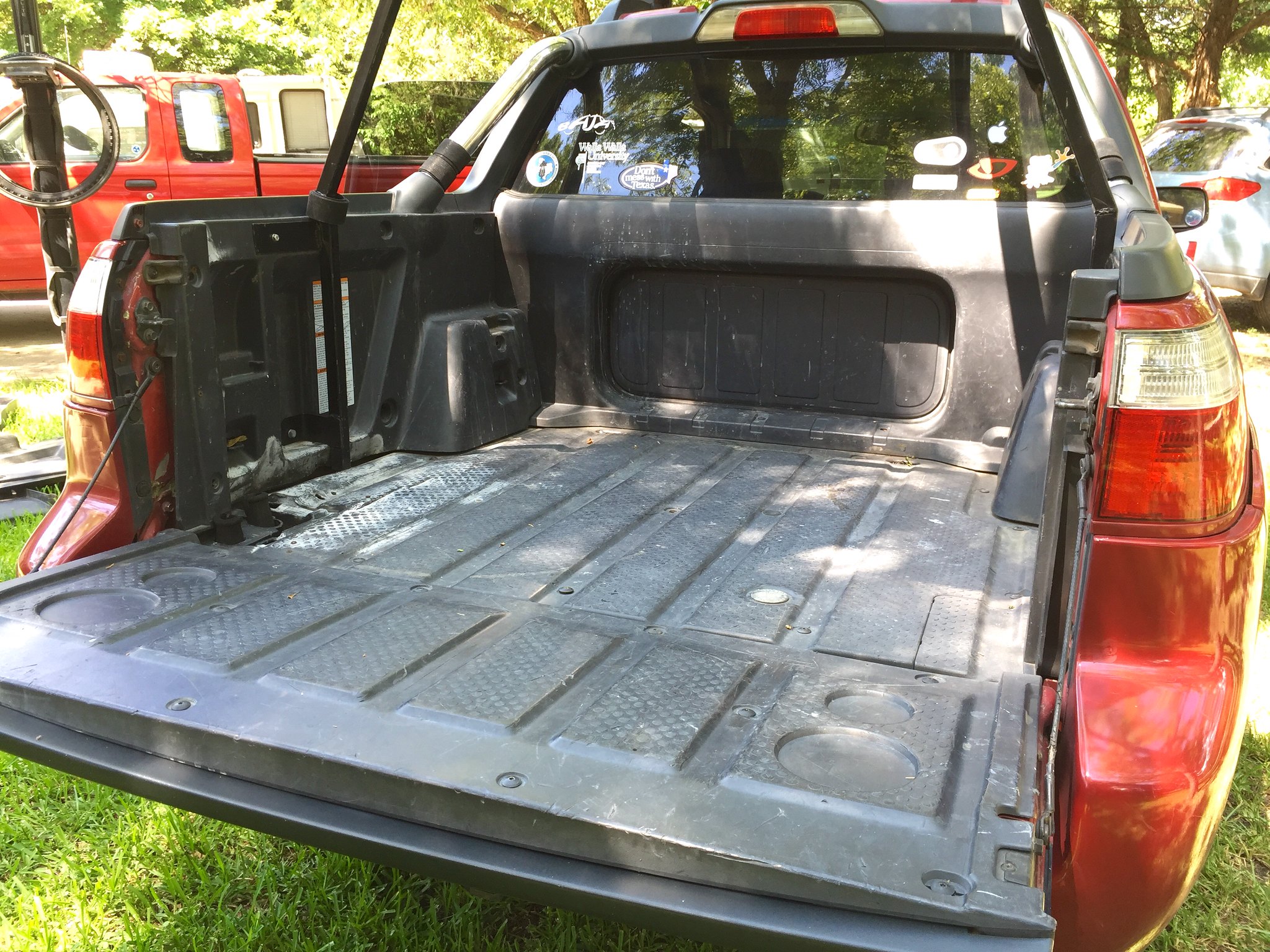 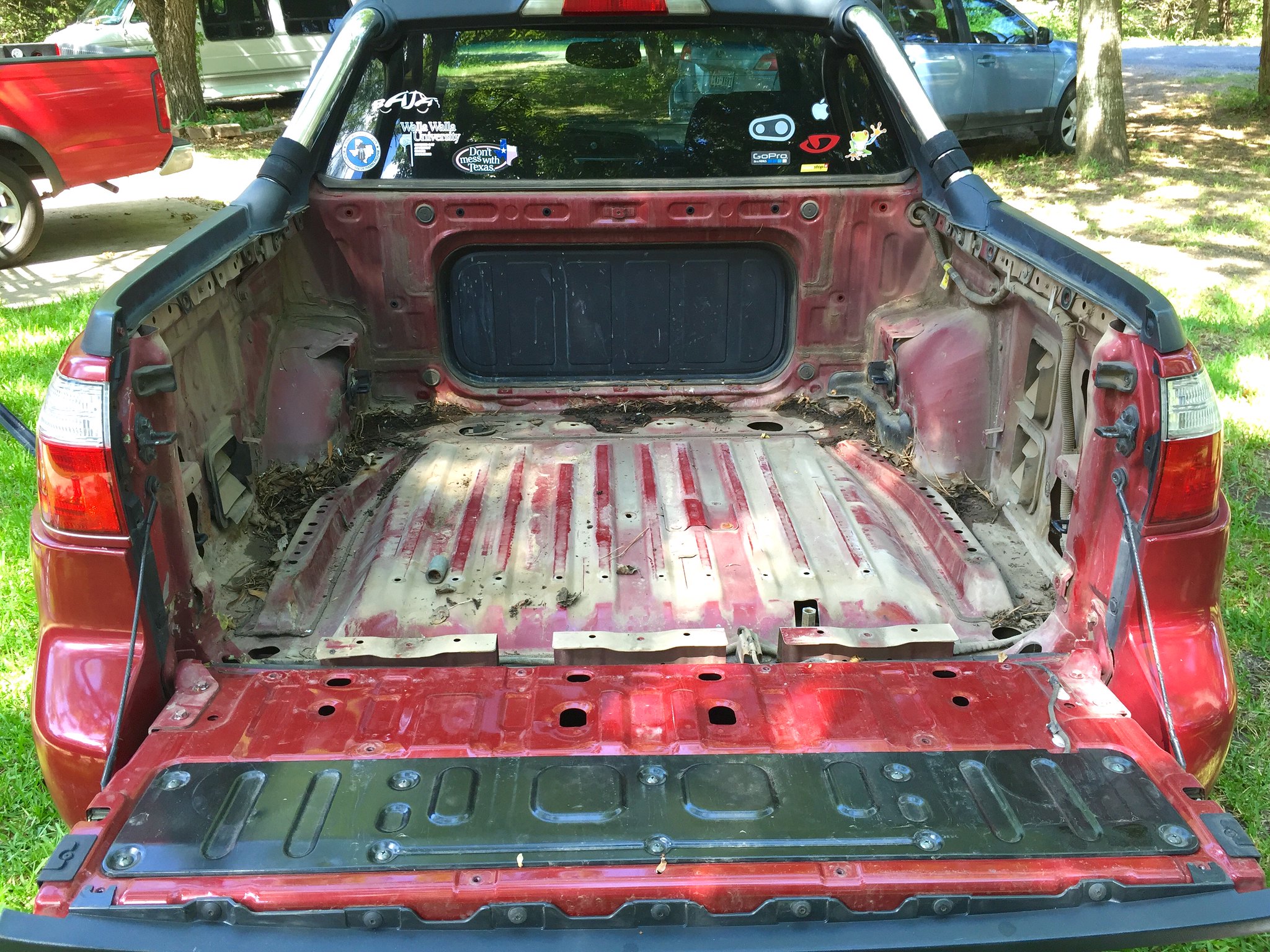 After the cleaning (how can you resist when they only come off like every 10 years?): 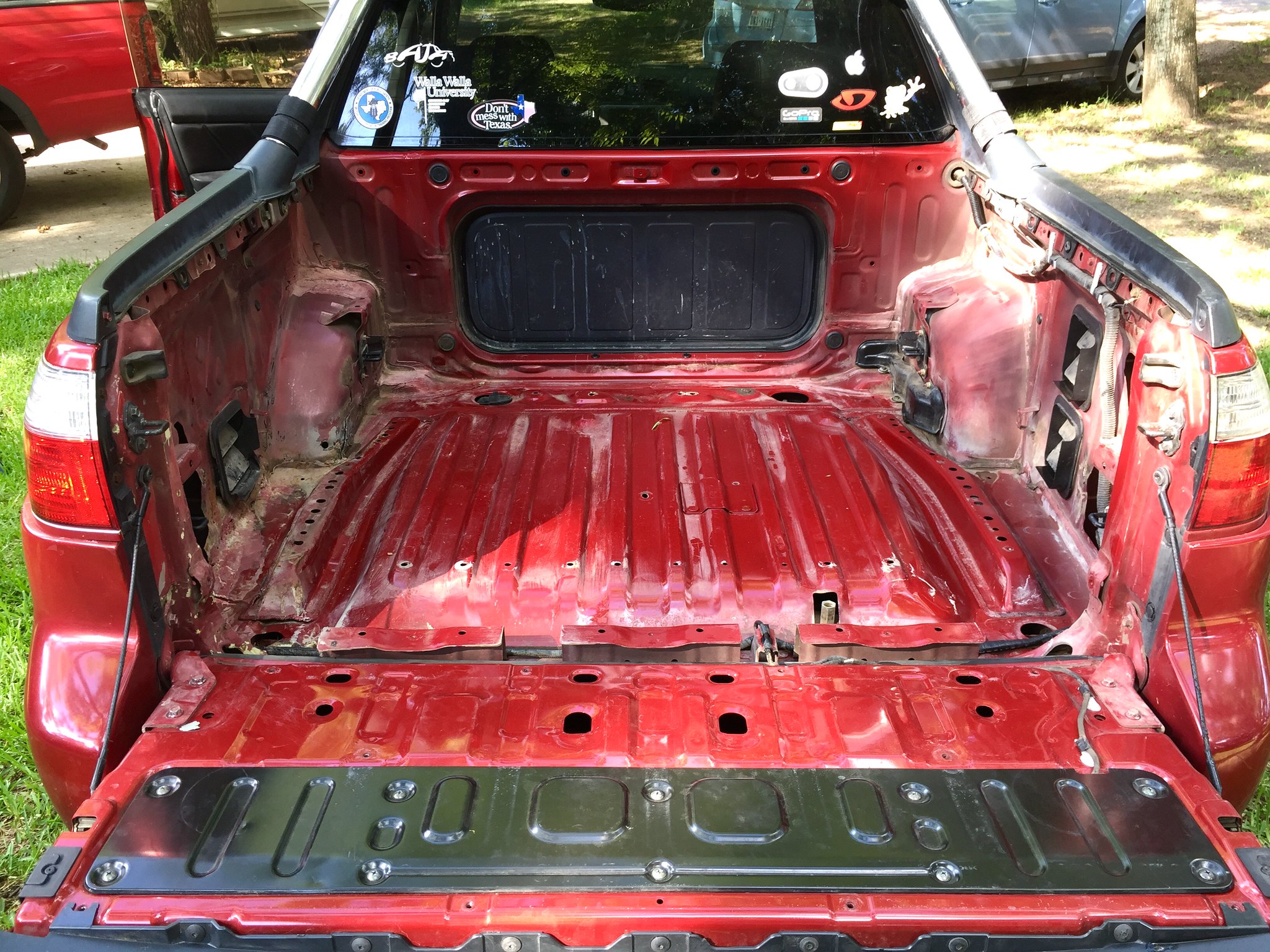 Finished job! Took a few hours to do it proper with cleaning the body and all the new panels. 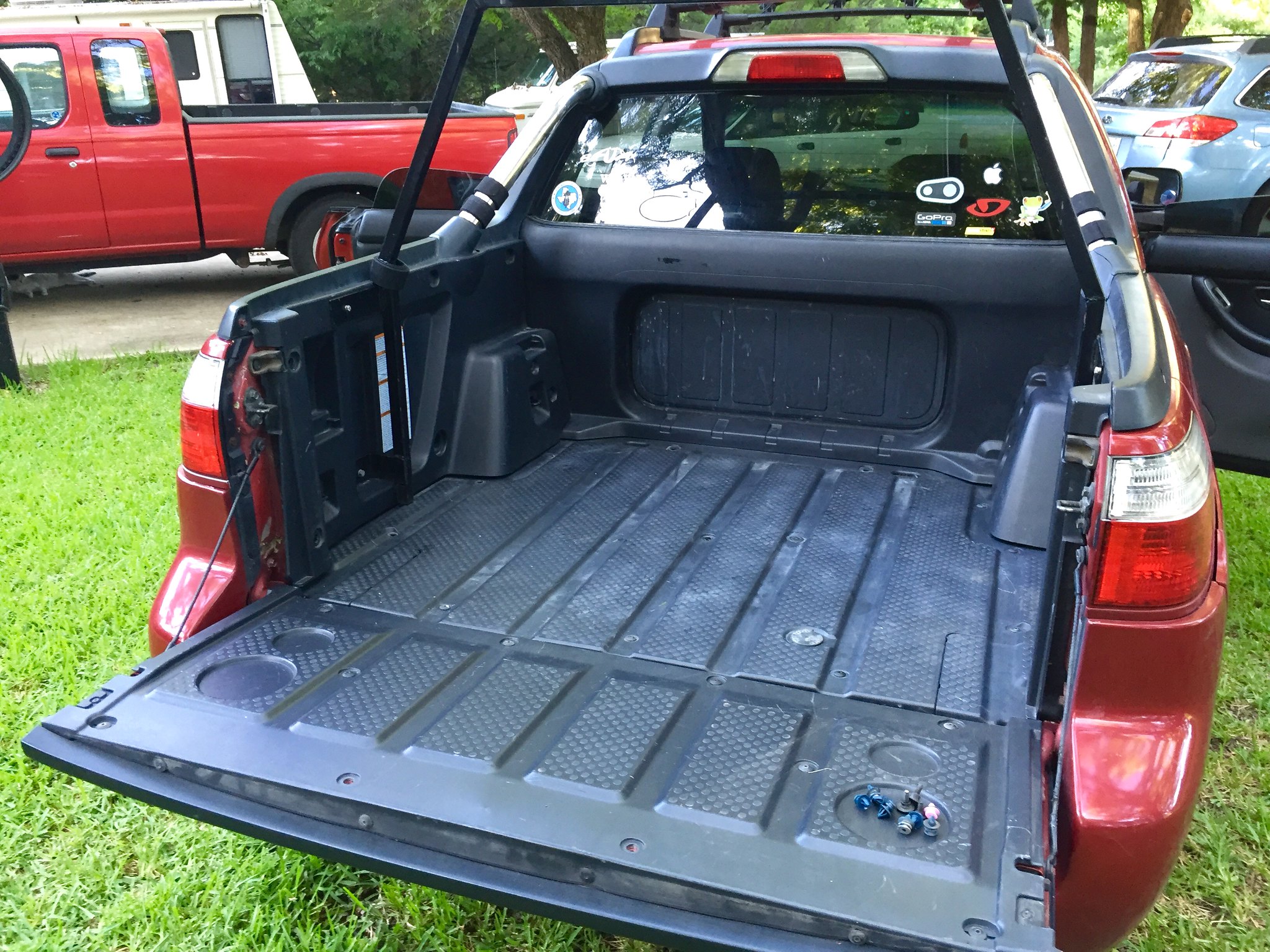 Something fun I learned is that the flaps in the bed are there for a pressure release. When you close the door the excess pressure escapes through the flap. This also helps reduce the noise if just one window is open. There isn't as much thumping from pressure buildup and release.
The hole that is right behind the flap and looks kind of black is the part we bent out in order to weld a nut behind it. That is the lower mount for our bike rack. 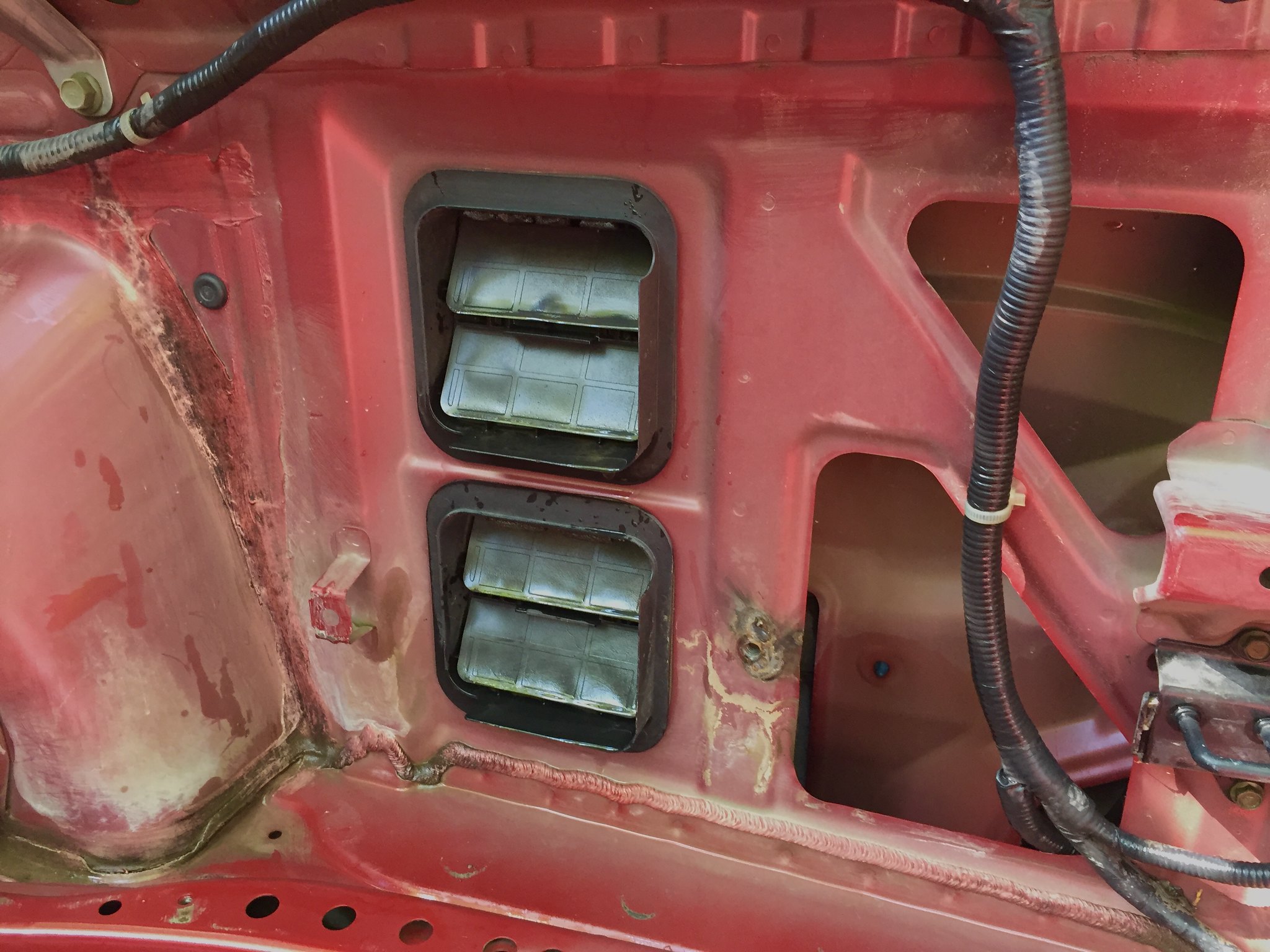 I have a few more things I am anticipating to do in the next few weeks...we'll see how many (if any) get done!

Here is a much needed update! 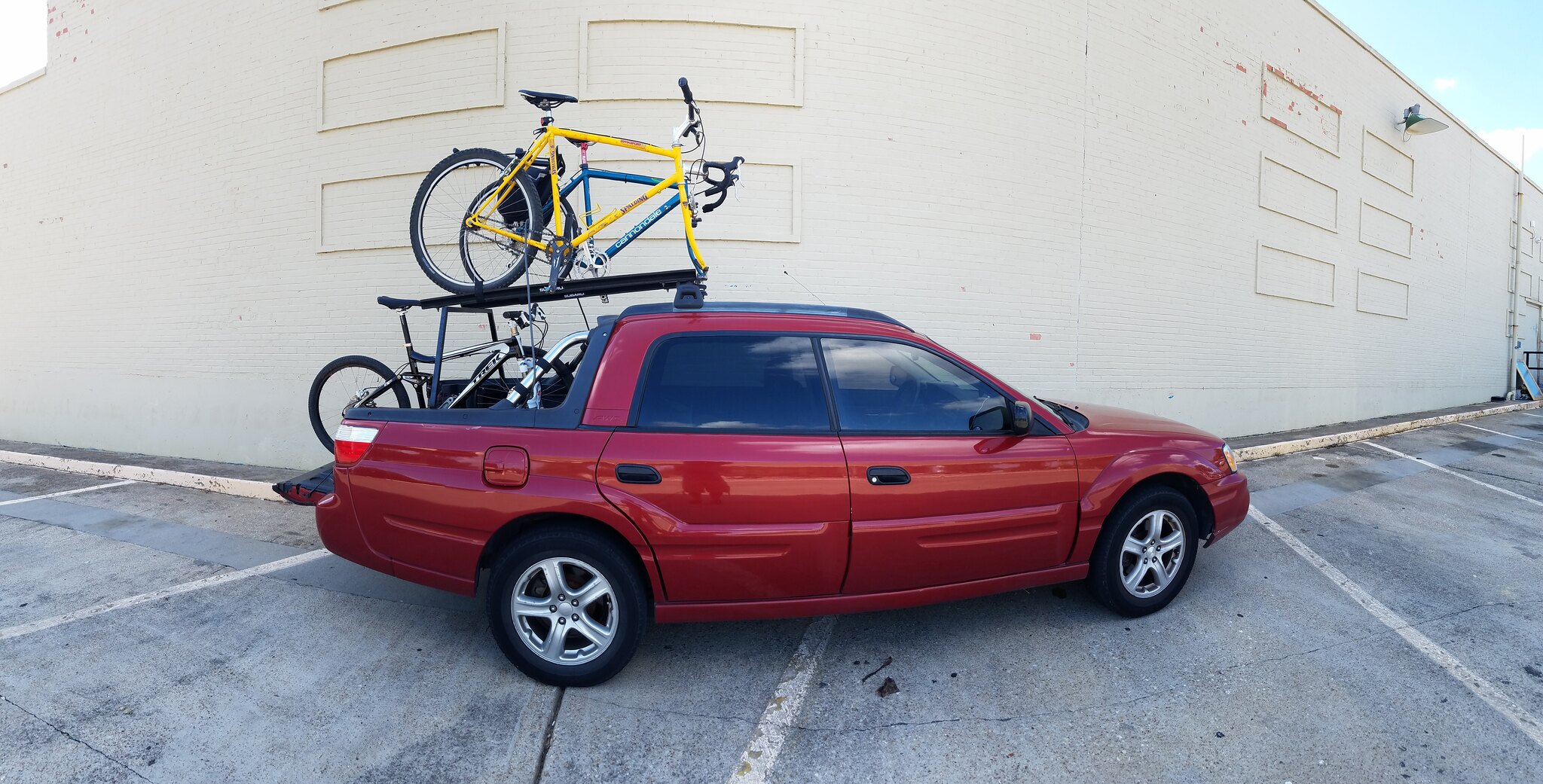 Then shortly after this on my normal commute, nearly home, the engine lost all power and started knocking. Sure tell of a spun bearing, likely from blown head gasket and rapid oil consumption. Unfortunately in Texas there aren't many who have the capability of rebuilding heads on boxer engines. Except Cobb, and that would cost more than the car's worth. We then purchased a used engine with 50k on the clock out of a legacy wagon and had it installed with a new timing belt, pulleys, head gaskets, and spark plugs.

Baja on the trailer to the mechanic. Pushing the limits of this trailer for sure. 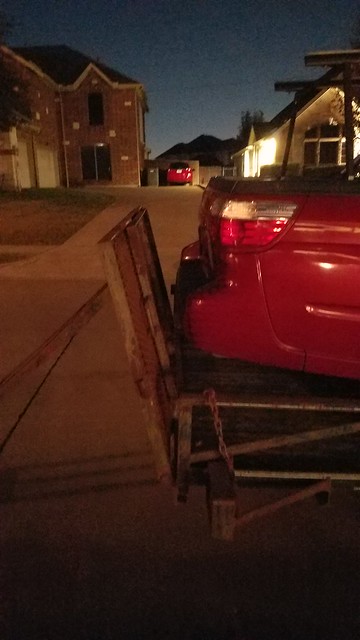 What happened next was a lesson for all, My last Dayco timing belt kit was perfectly fine, lasted about 35k without issue. Since it had been good, we got another like it. This one, however must have not had grease in one of the bearings and failed on my mechanic 22 miles after the engine swap and allowed the timing belt to jump timing. 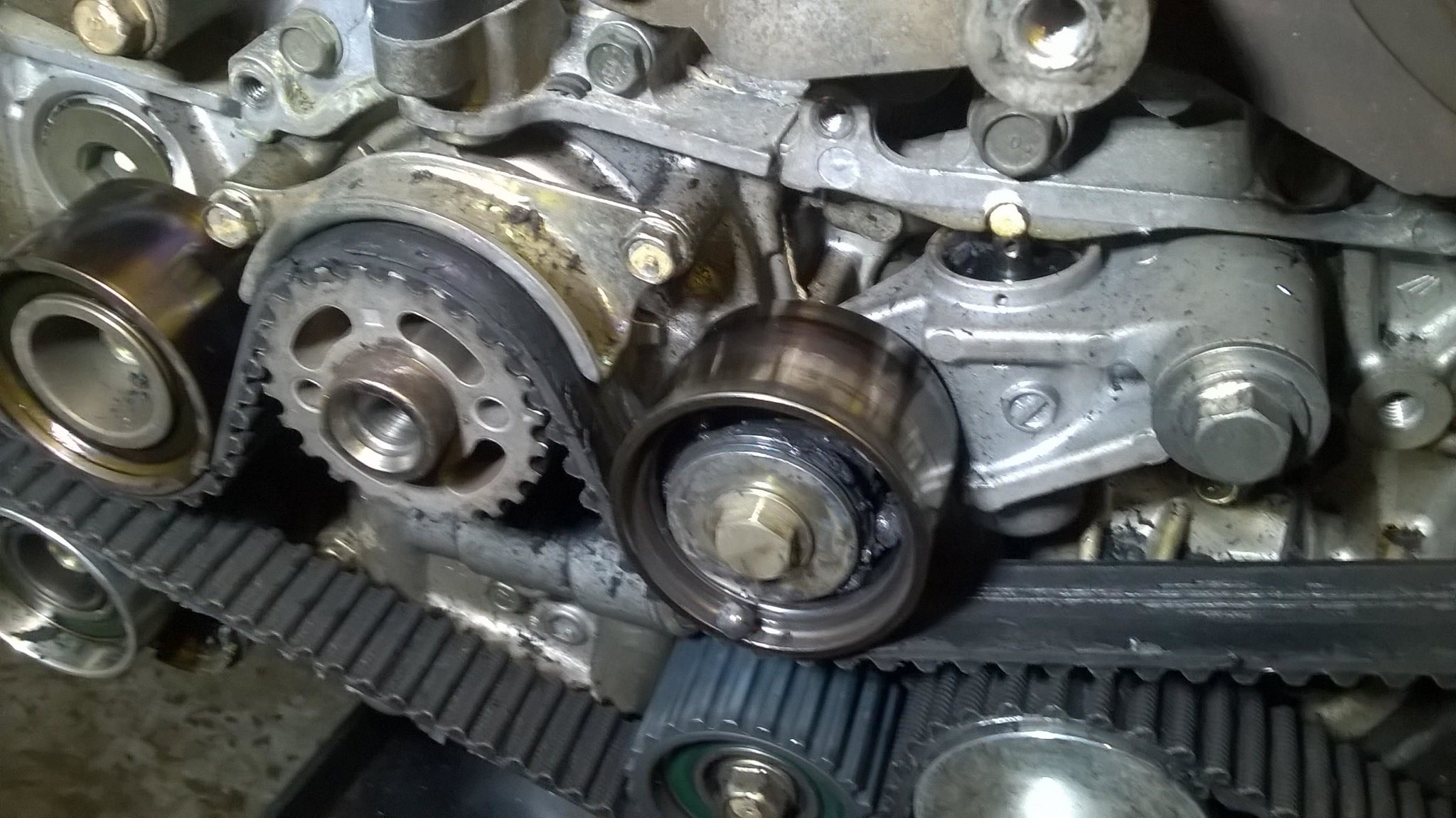 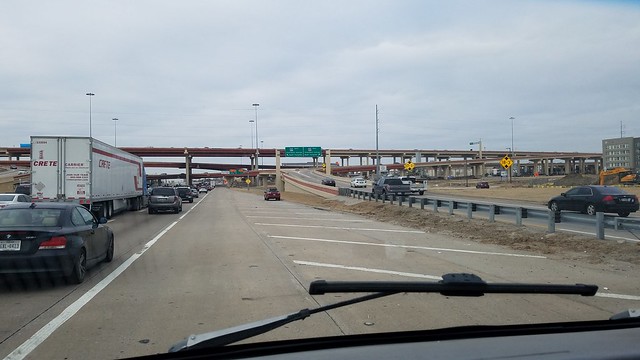 Back to the mechanic again. After inspection it didn't jump enough to hit valves. The mechanic replaced the destroyed pulley with one of the 35k ones that we had on the old engine and the belt with oem. This wasn't ideal, but the Baja was back up and running.

3k miles later I'm doing an oil change and decide to check the timing belt though the peek cover while I'm at it. To my surprise, I found a lot of rubber shreds all over inside and a nice work spot on the timing belt. It was a pretty simple issue, just the guide set too close to the belt. The guide is only found on the manual transmission Subaru's, but I would argue it saved the engine from jumping more than a couple teeth when that pulley failed. It is definitely staying on the engine. To calm all my doubts about the half-used pulleys and worn belt, we purchased an Aisin timing kit from Japan. Brand new water pump, pulleys, gaskets, and belt all sourced from the manufacturers that source to OEM, but for $150. Oem for just pulleys and belt were over $600. I can now have peace of mind for another 100k. 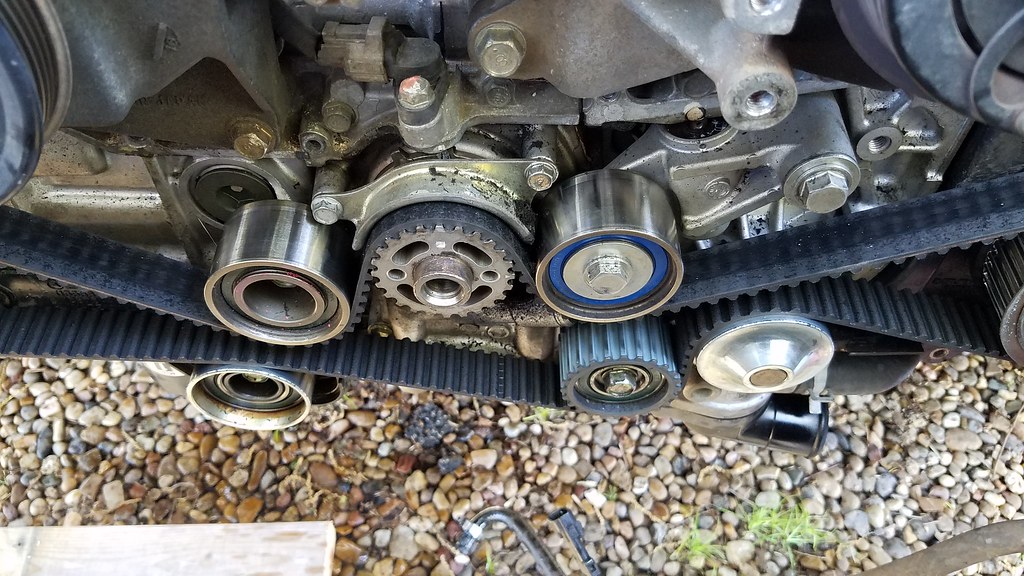 Now for more fun stuff. I cut some new vinyls. If anyone likes them, hit me up. Note: words on your back window will read correct through your rearview mirror. So you can look up and enjoy them too. 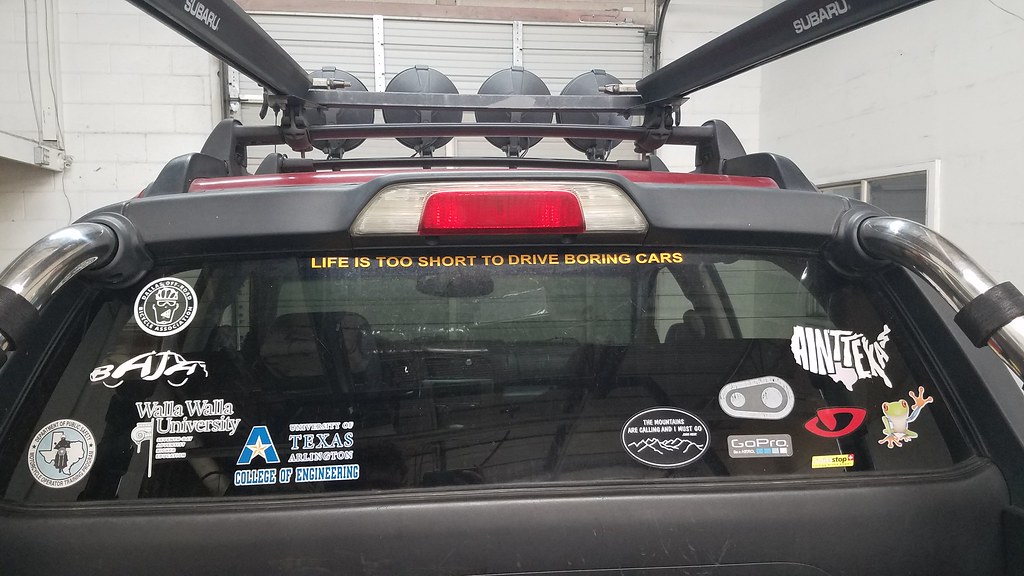 I got a new to me Thule doubletrack bike rack that is absolutely amazing. Much easier than always removing the wheel. There is enough clearance for bikes in the bed too still. In the pic below I'm carrying 6, but room for one more in the bed. Bikemobile back in business. 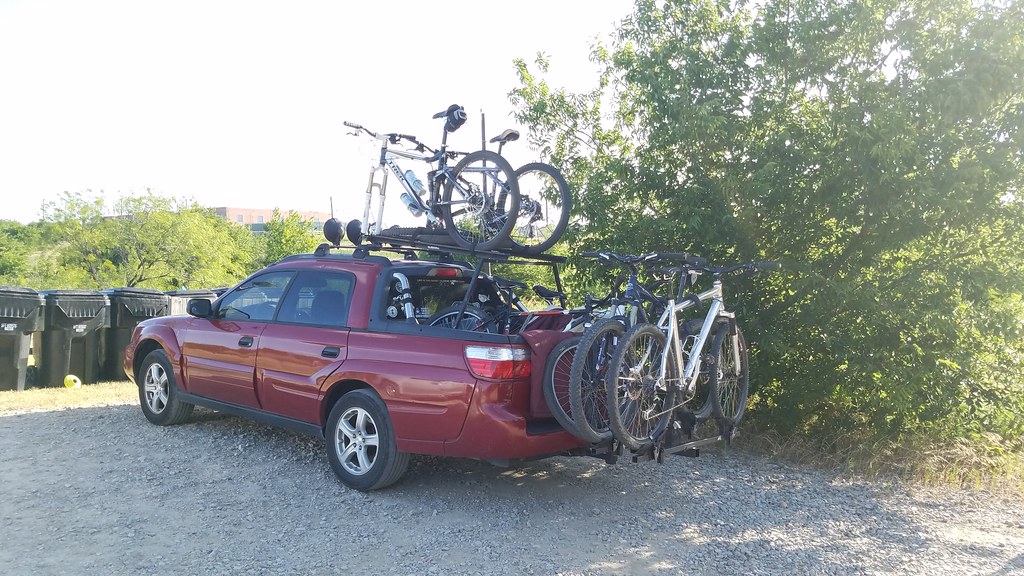 Life happens, tires wear out. This one in particular not worn evenly. As soon as I saw threads the car was parked till new tires arrived. Went with something cool too. General Grabber AT2, 215/65/16. They are M+S rated and studdable. Will be great to not need chains or a second set of snow tires. They also look amazing. 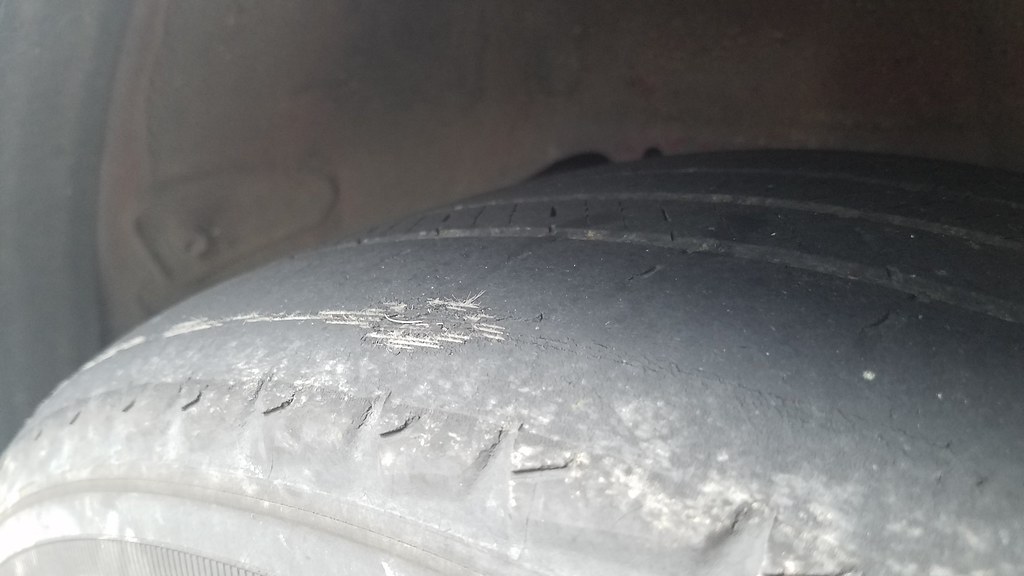 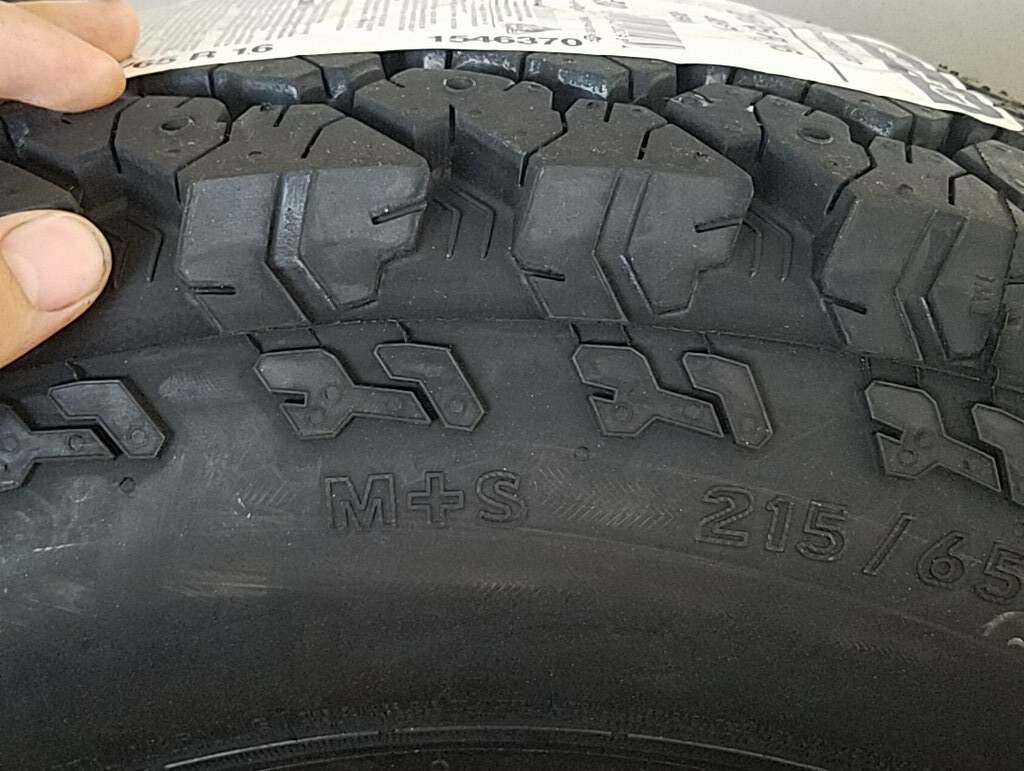 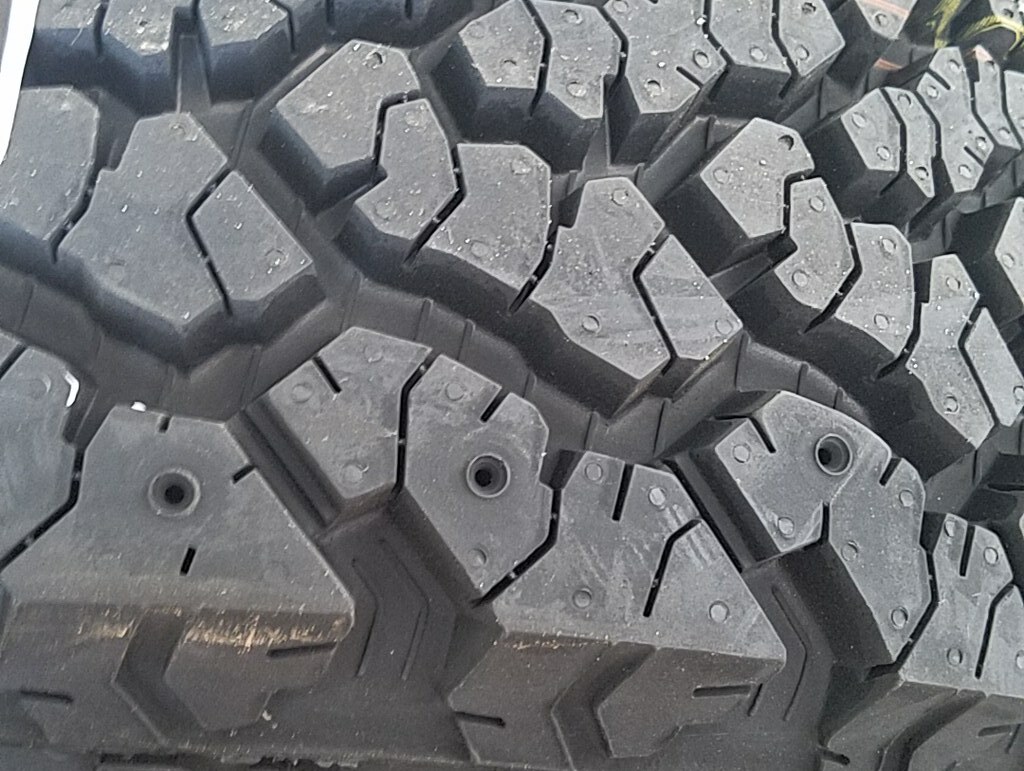 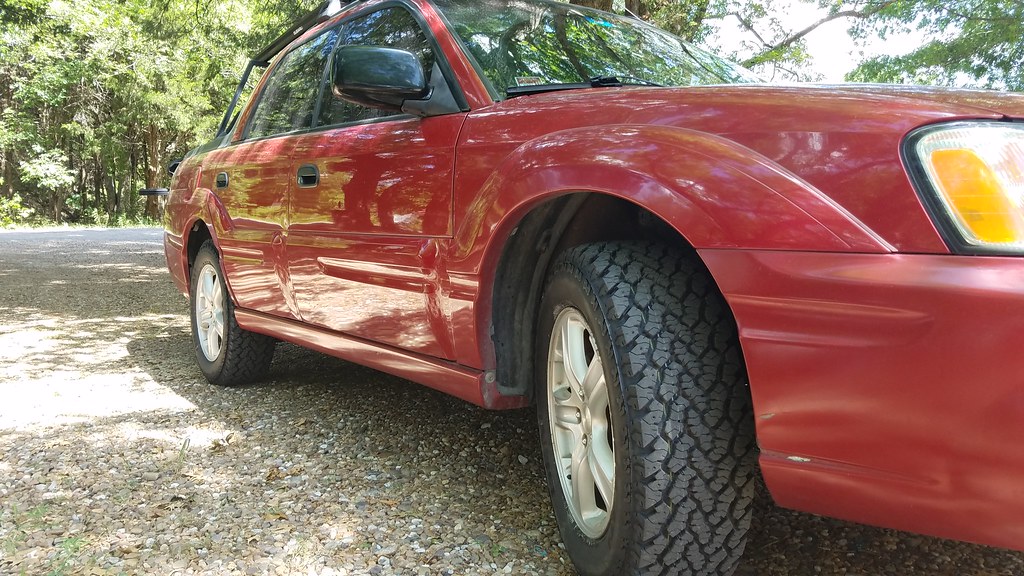 FYI the M&S rating has absolutely no performance measure. it simply means that 20 or 25% of the surface of the tire is grooves (ie not touching the road) thus it's quite possible to have a non M&S rated tire to perform better on snow and ice than a M&S rated tire. Being in Texas, I don't imagine that's a big deal for you though.
-Russell
"You don't get to judge me for how I fix what you break"
03 sport 5mt
05 turbo 5mt vf39 and other STI bits, 3" turbo-back
Top

Here are a few pictures from an off-roading adventure with some friends. It was a lot of fun and definitely tested the Baja's approach and departure angles. Grabbers did amazing. 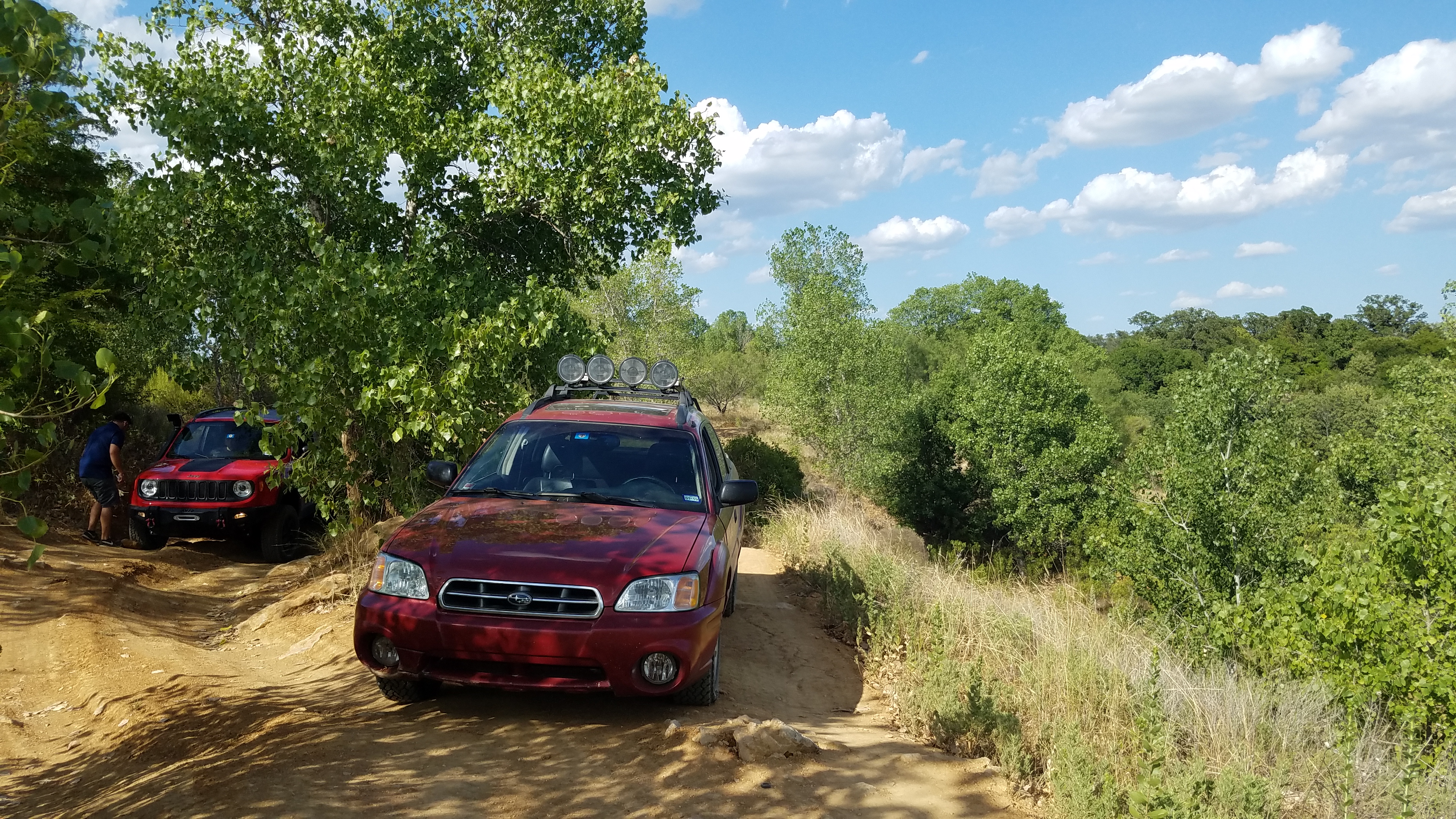 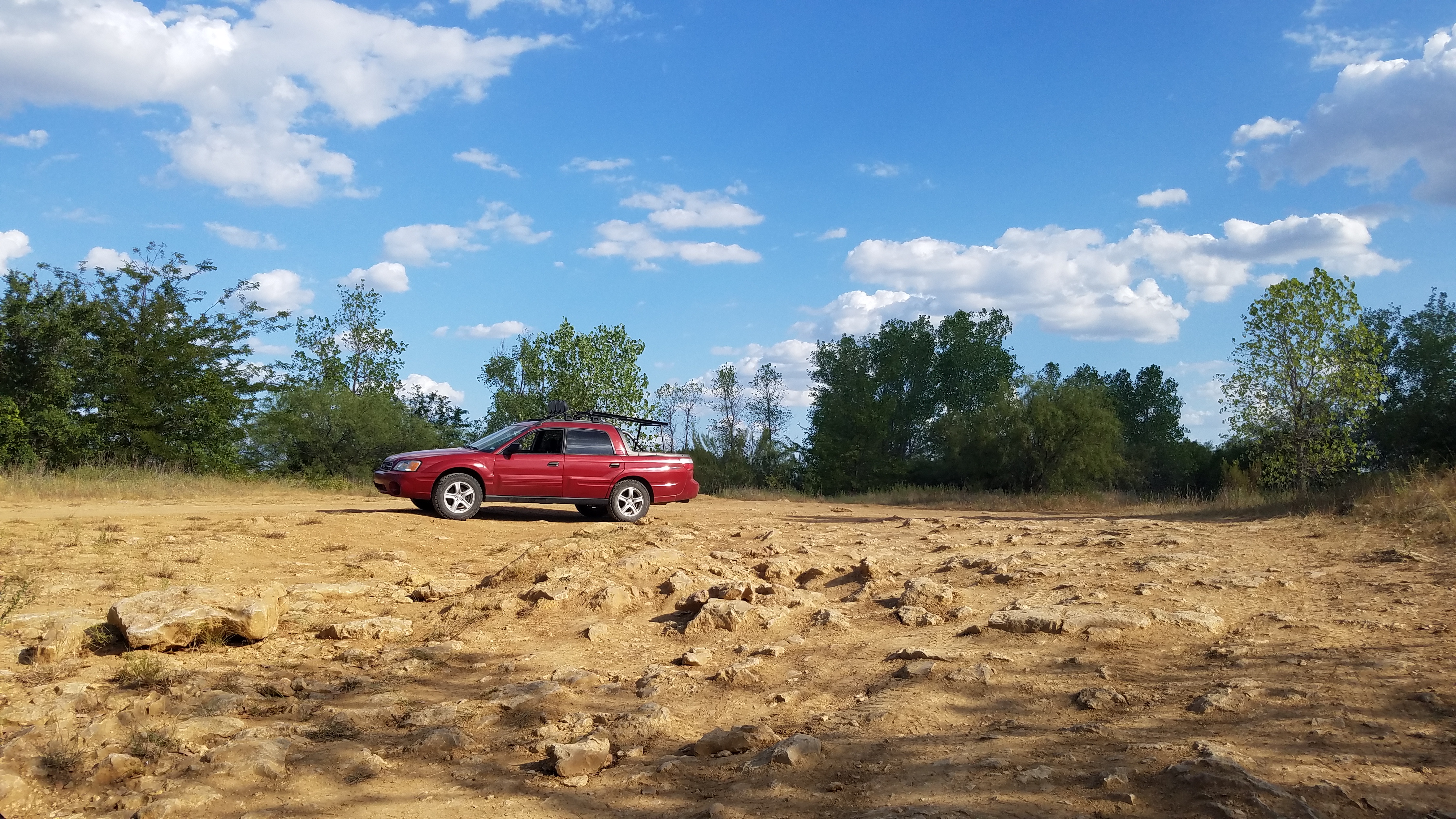 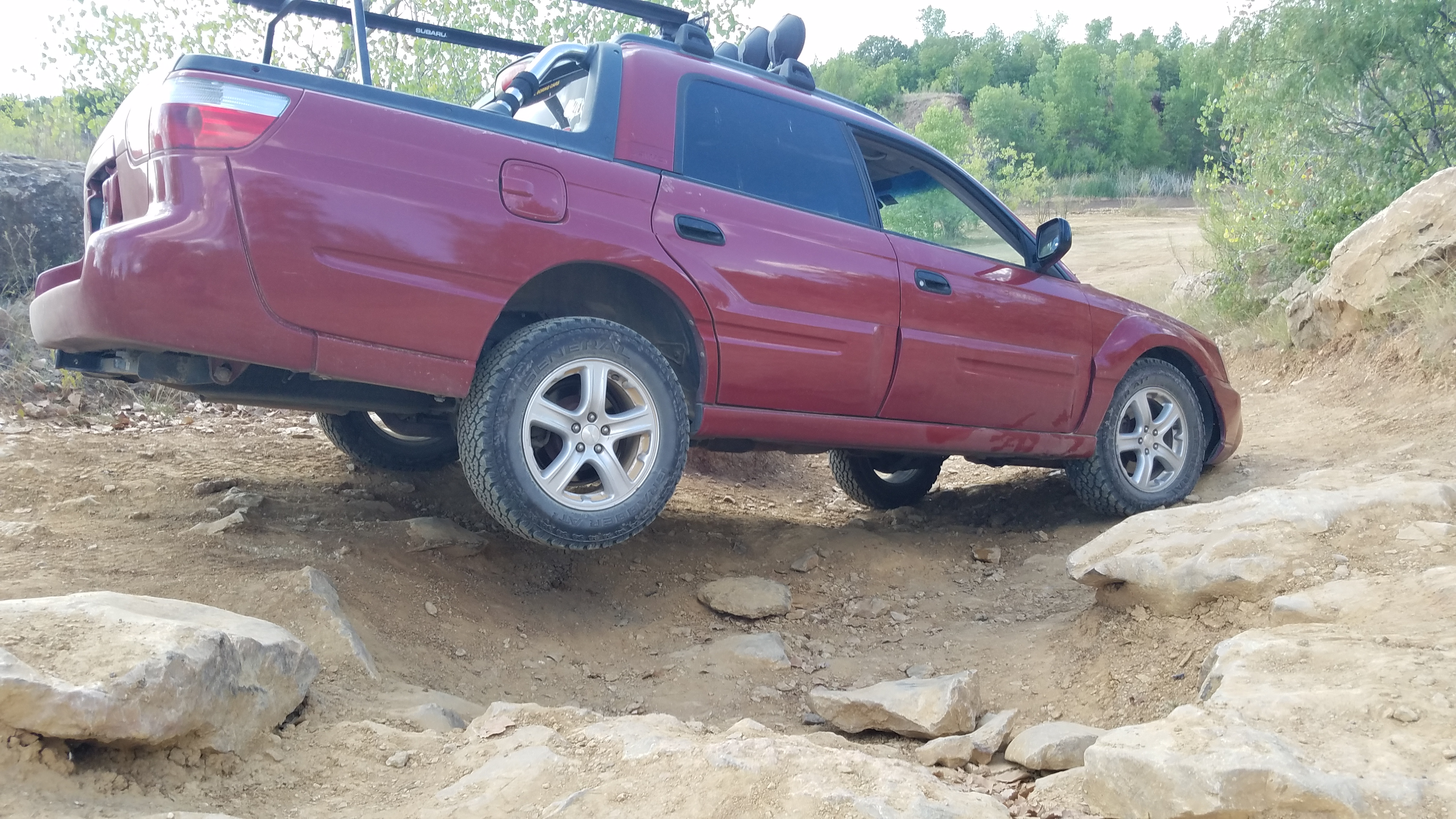 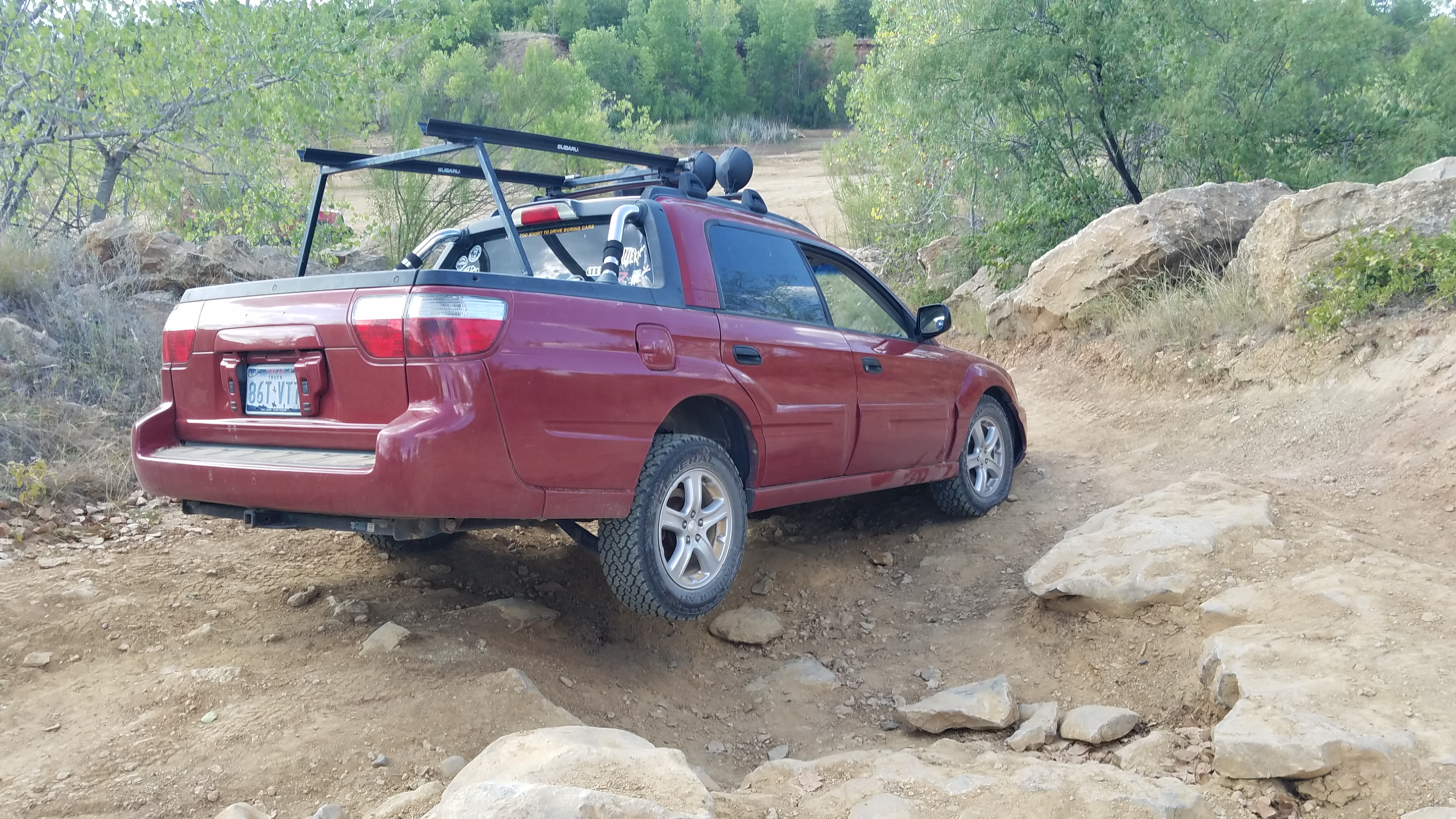 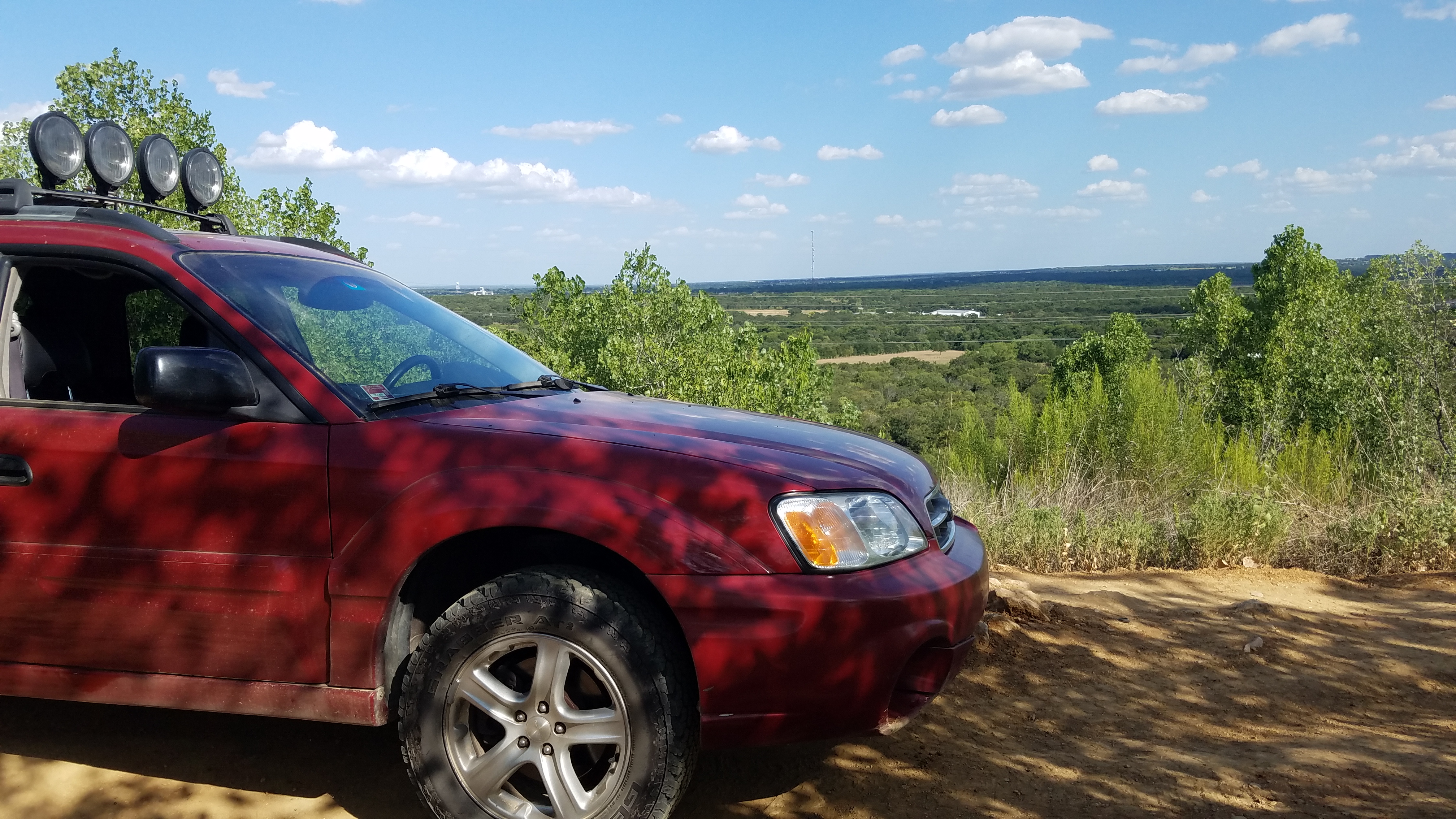 Another Bike Rack
A new addition to my bike collection justified an extra bike rack on the Baja. Designed it to be removable with 2 nuts, store easily, and carry normal bikes or a tandem. It will also be able to work with the existing racks (maybe having to turn handlebars depending on clearance.

Bought a 1" steel tube for the base, cut some scrap metal to mount a fork mount to. I'm kind of proud of that MIG welding job. I don't get to practice much at all. 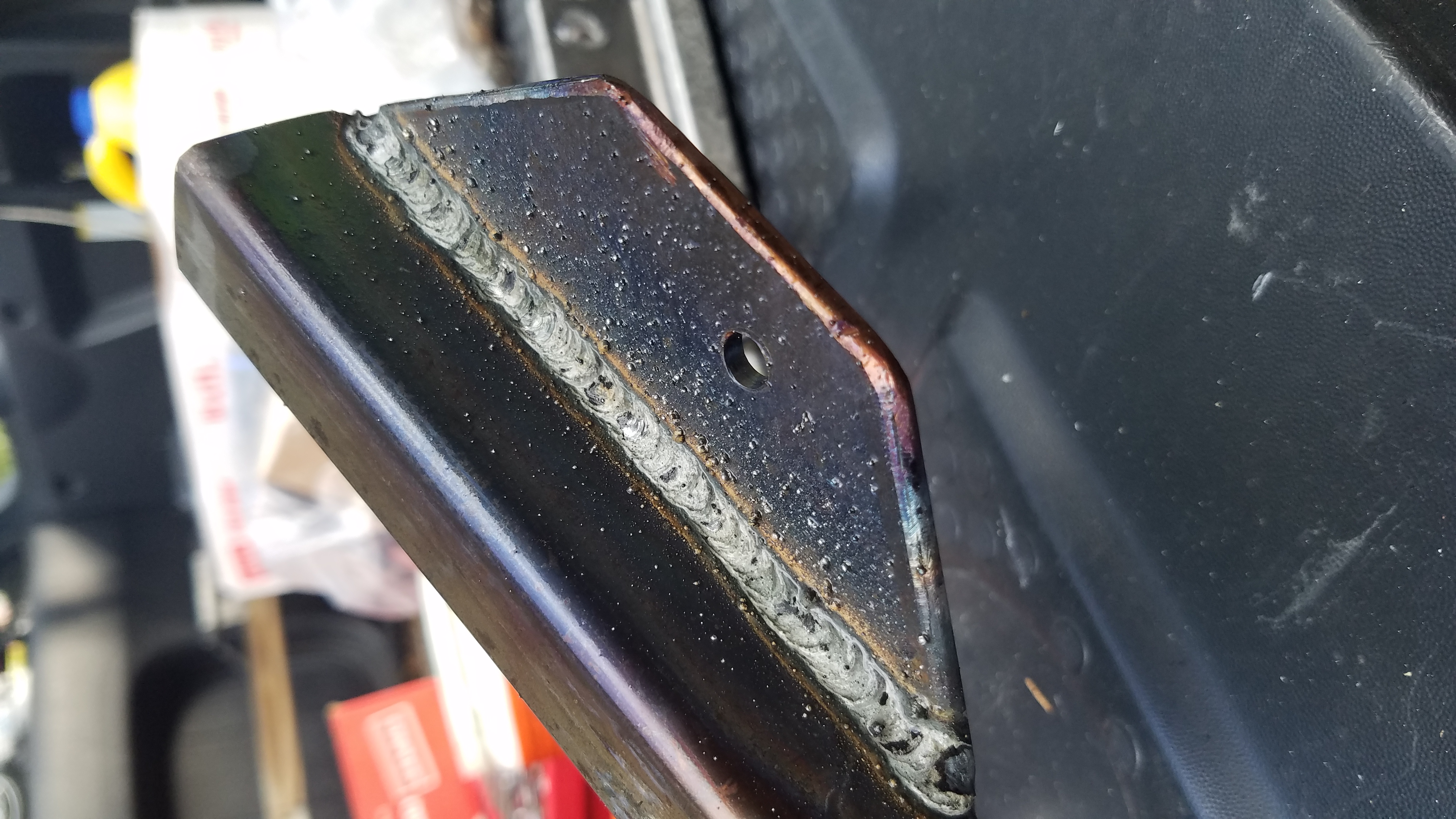 Of course, drilled holes and used the dremel to make them square and fit carriage bolts super cleanly. 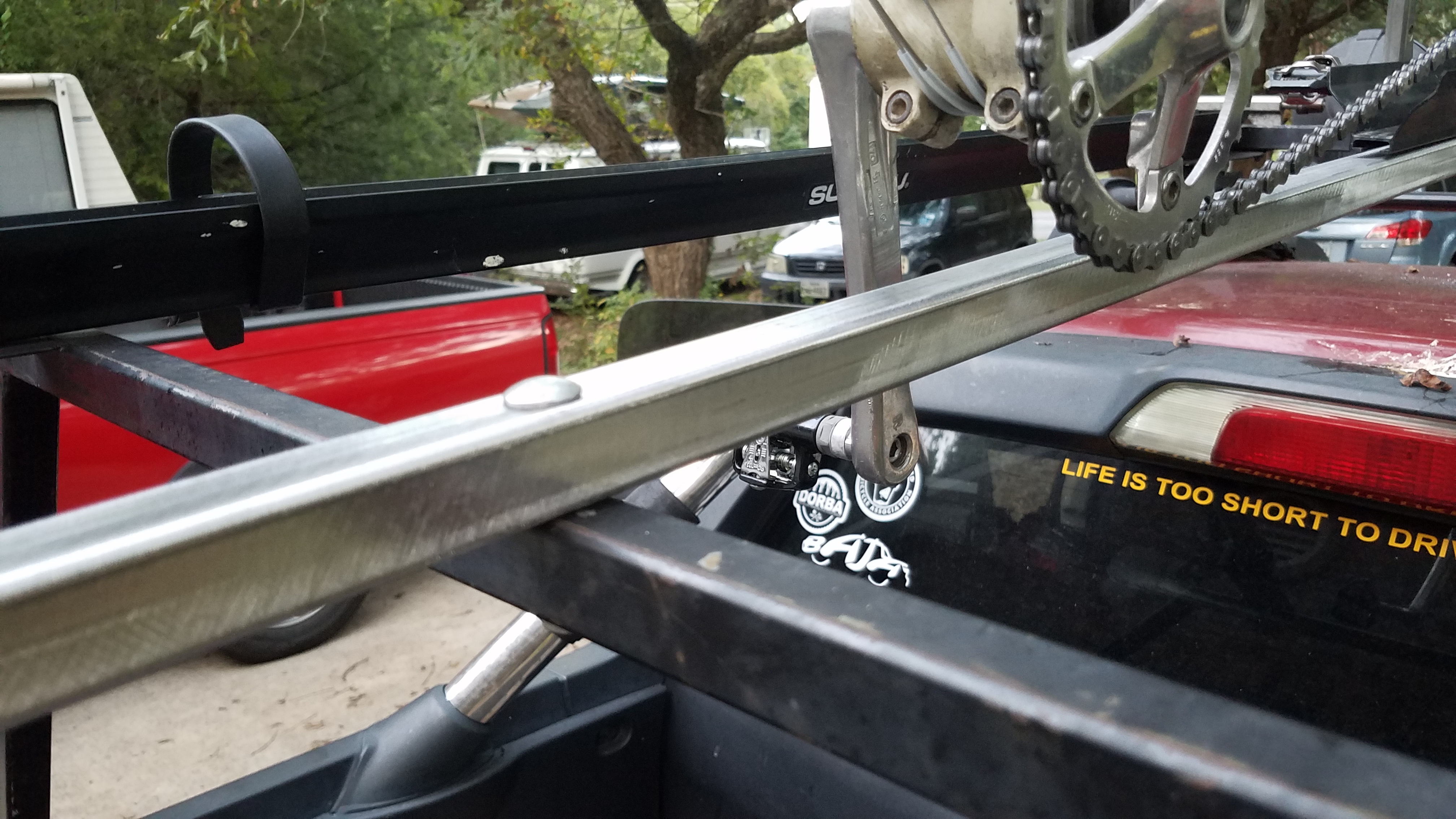 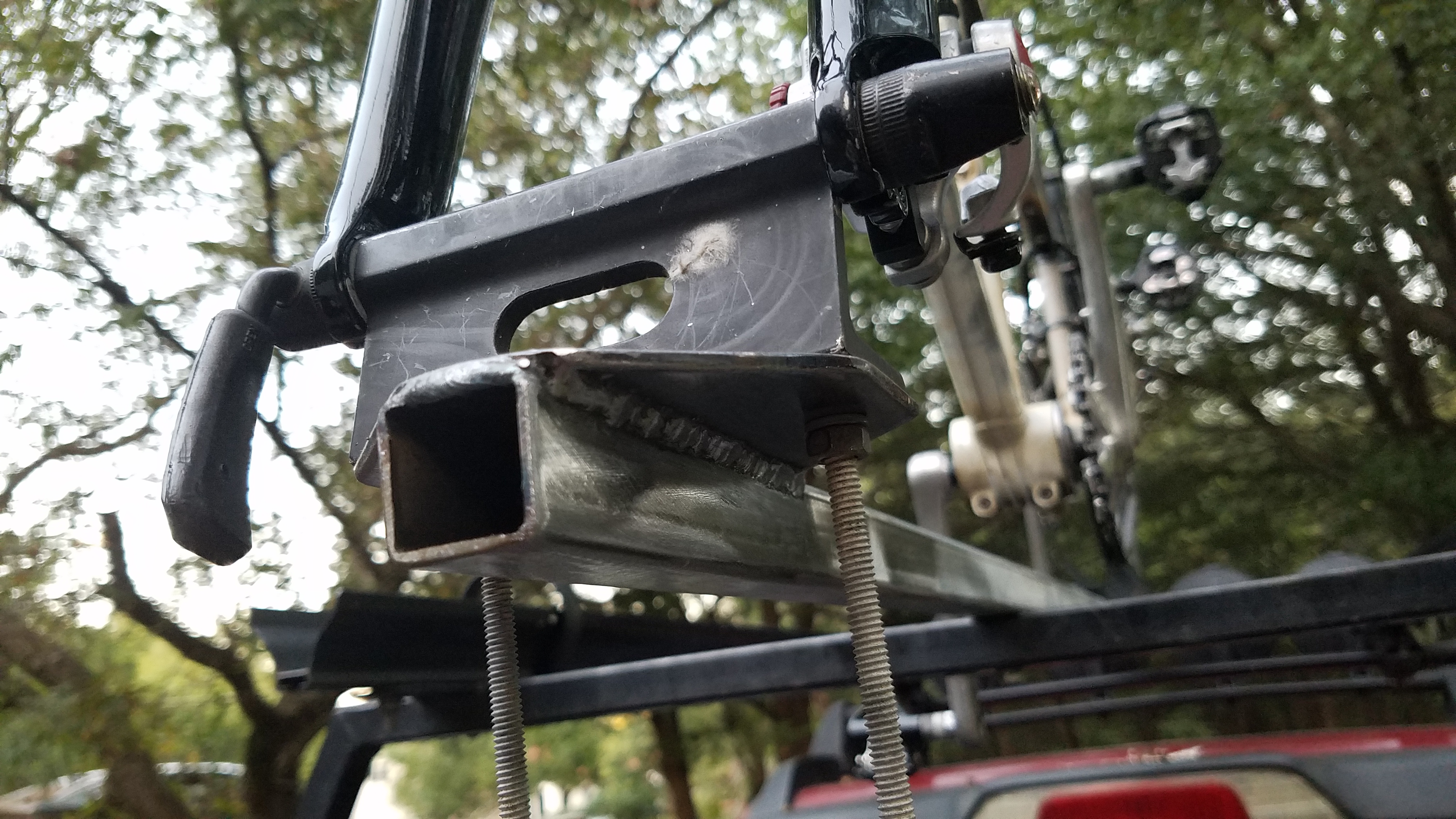 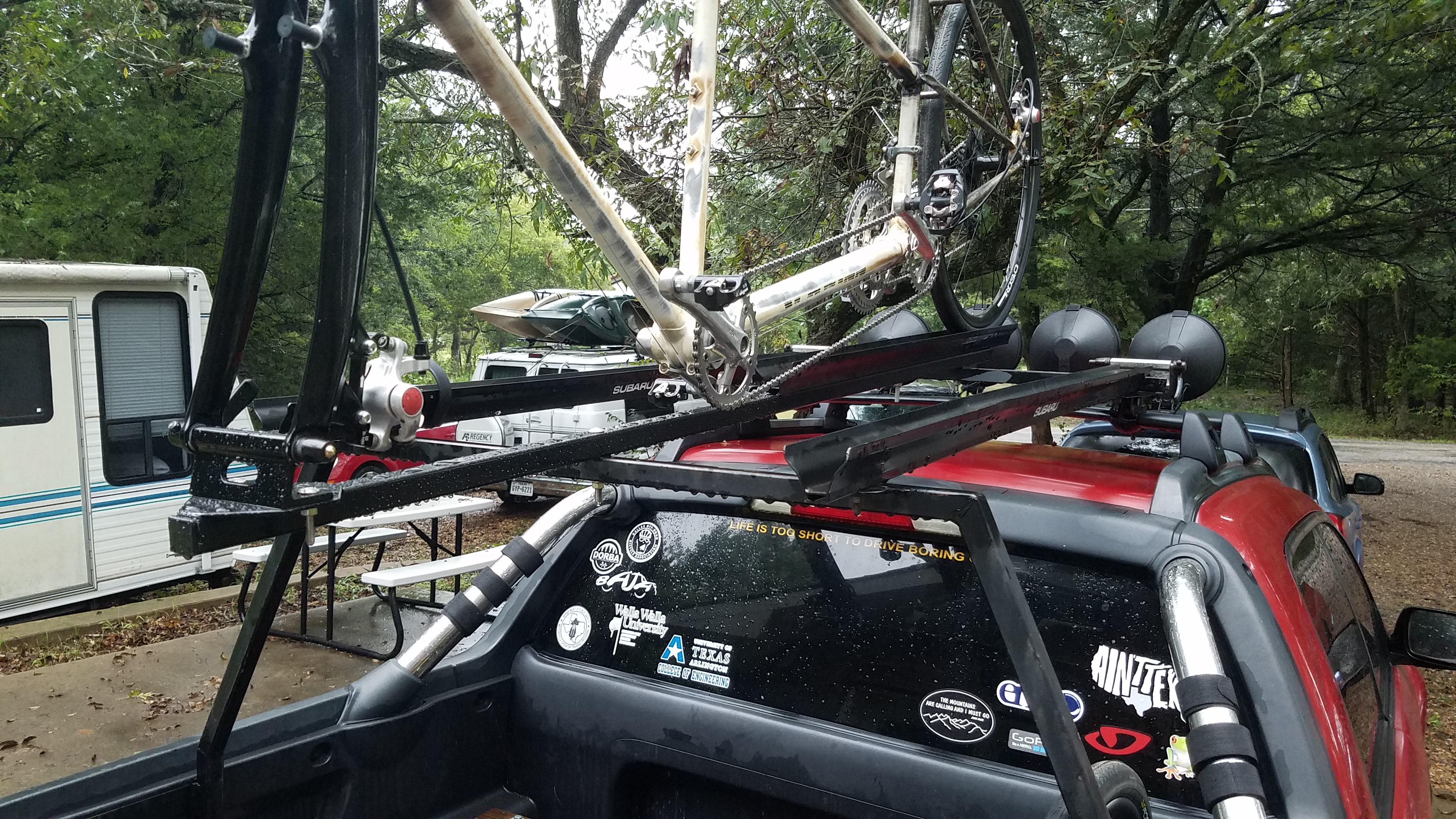 For a nice clean final product! 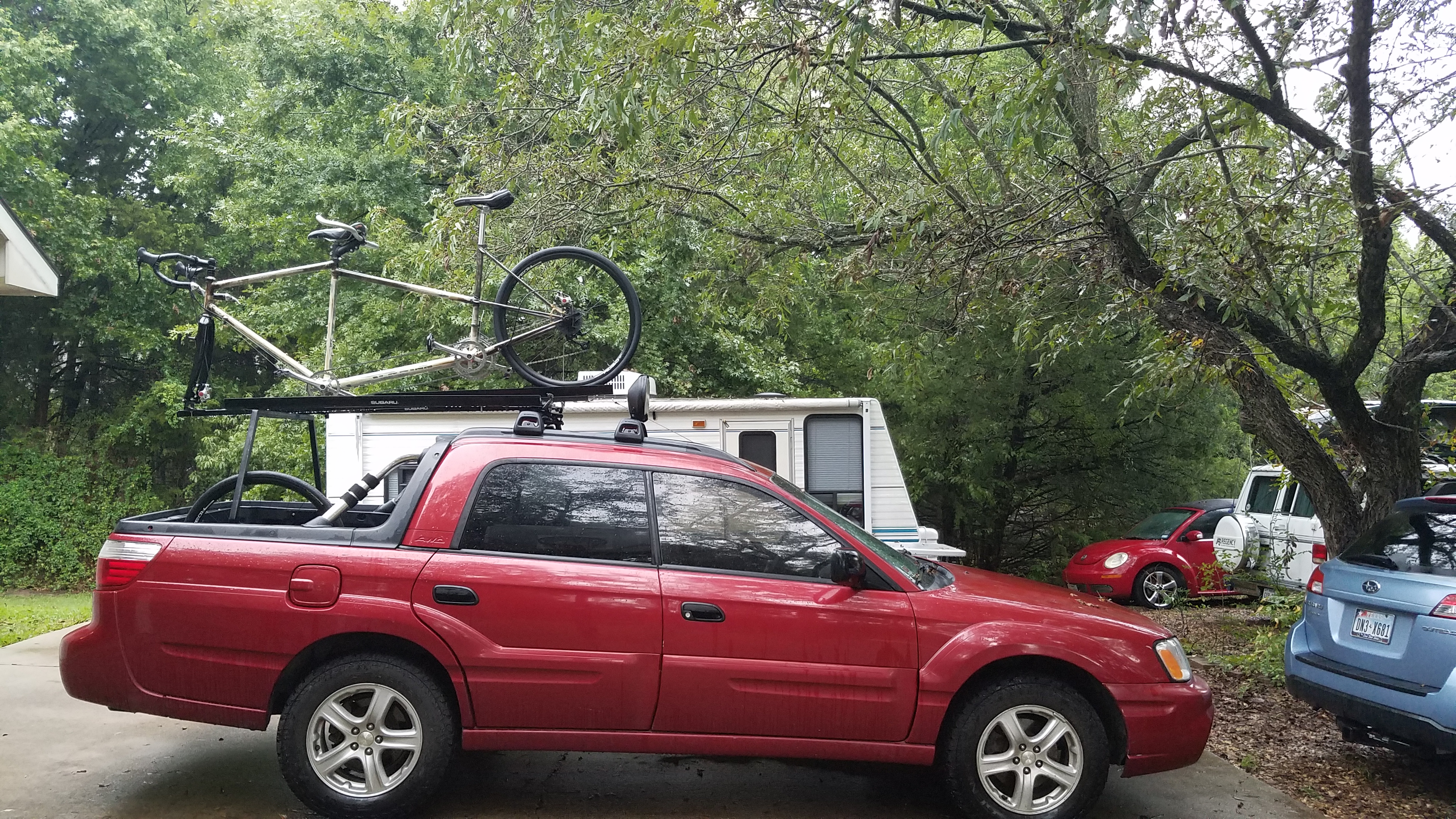